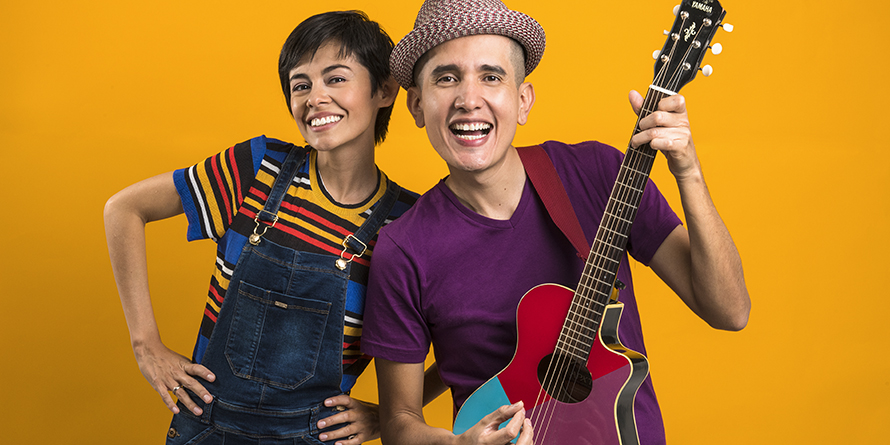 Performing at the Sunrise, Summerlin, West Las Vegas, and Enterprise Libraries in February, Andrés and Christina, better known as 123 Andrés, are the new face of Latinx music for families in the U.S. and Latin America. They bring joyful sounds, a passion for bilingualism, and a high-energy love of music that gets kids singing and dancing in Spanish and English.

Slowly strumming on the guitar he learned to play when he was a small child, Andrés earnestly sings: “It doesn’t matter where you are from, if you speak English or Español. It doesn’t matter. There’s nothing wrong, we can all get along.” In a nutshell, those lyrics define the message of 123 Andrés, who use their music to encourage tolerance, bilingualism, and dancing.

“I started developing my own show about my culture—really trying to find what I could give to the community, what could I give to the kids that they could learn and grow,” recalls Andrés, who grew up in Bogotá, Colombia.

The duo’s most recent album, “Canta las Letras,” helps children learn about letters in Spanish with upbeat songs that span genres from salsa to huayno. Before that, their dual-language album “Arriba Abajo,” won the Latin Grammy for Best Children’s Album in 2016, the Parent’s Choice Gold Award, and was named a Notable Children’s Recording by the American Library Association.

“My goal is to get kids interested in music, language, and culture when they come to the show. They are making a connection with music that I hope will last the rest of their lives,” says Andrés, who had his first studio experience at age eight and eventually went on to earn a doctorate in music.

Enthuses the Latin Grammy Award winner, “Music is so powerful, it’s just such a great way to teach languages and to teach communication while taking children on a journey.”