Please support our community programming for adults, teens, and children by donating to the Library District Foundation! 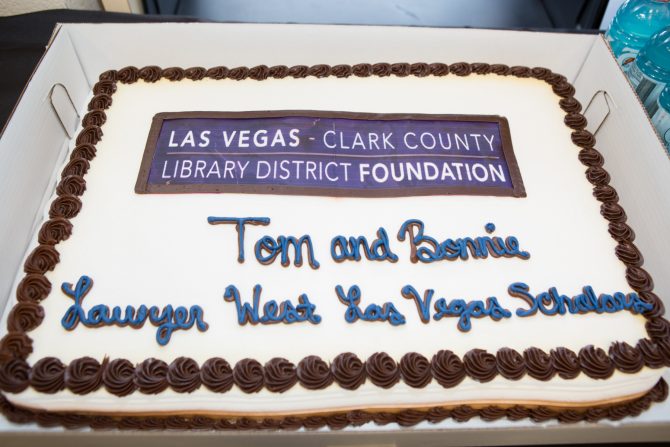 In 2010, Tom and his wife, Bonnie Lawyer, made a pledge to honor the civic spirit of the West Las Vegas Library staff by creating a scholar award program that would help local youth pursuing higher education. The inspiration to form this scholar award program came from Tom when he attended a Foundation meeting at West Las Vegas in 2009.  He was impressed with the West Las Vegas staff commitment verging on a “calling” to serve the community.  Tom and Bonnie always love hearing more about how the staff works with community residents, making the library a vibrant hub for learning and culture.  As the program continues year after year, thanks to the incredible generosity of Tom and Bonnie Lawyer, the Foundation benefits by understanding neighborhood, family, and student challenges and conditions better.  Every year, the review committee comes away with more inspiring stories of the power of the West Las Vegas Library as a catalyst for youth, family, and community advancement.  We celebrate this year's winners and wish them the best on the road ahead.

Ricardo Avelar – Ricardo just completed his sophomore year at UNLV, pursuing a bachelor’s degree in psychology. His goal is to open his own psychology clinic and offer pro-bono services, especially to children. He has been a Page at the West Las Vegas Library for four years and spends his free time volunteering in the community.

Crystal Culverson- Crystal graduated from Sierra Nevada High School in 2000 after having dropped out of Vo-Tech SNVTC to take care of her newborn son. Since then Crystal had two more children and faced some difficulties. Now, Crystal has gotten back on track and is interested in pursuing an associate’s degree in business at CSN.  Her main goal is to establish herself in the business field and to show her sons that even though you may have setbacks in life, it is never too late to accomplish your goal. The West Las Vegas Library has been instrumental to Crystal for getting into the workforce and making her aware of the many opportunities that were open to her.

Angelo Narciso- Angelo is a graduate of Veterans Tribute CTA and will attend CSN in the fall to study architecture with a goal of completing his education at UNLV. He has been volunteering at the West Las Vegas library since June 2018 and has contributed over 182 hours of his time. Angelo came highly recommended by Michelle Carron, the youth volunteer coordinator at the West Las Vegas Library. Michelle described Angelo as a dedicated volunteer with a strong work ethic who is always polite and respectful to patrons and staff.

Emmily Paniagua- Emmily is currently a student at CSN, pursuing an Associate of Arts degree, with plans to attend Laguna College of Art and Design in the future. Producing art has been a crucial part of Emmily’s life and her ultimate goal is to create cartoons with positive messages that will motivate youth to become better people. She works as a Page in the Youth Services department and recently was given the opportunity to use her artistic skills to design the West Las Vegas Maker Fair 2020 logo. Her original connection to the West Las Vegas Library came when she volunteered in the Reading Buddies program.

Luis Soto- Luis is a sophomore at UNLV majoring in Journalism. He wants to be a journalist to reach out to audiences in a truthful way, without skewing perspectives. He believes that there are over-coverage and under-coverage on topics that may need a spotlight. His goal is to write stories that would help his community and comfort the afflicted. Luis volunteered for a year and a half at the West Las Vegas Library in the Reading Buddies and tutoring program and now works as a Page. Luis says that “working at the library has assisted me by exercising a simple everyday moral: helping people. In the library, a simple interaction may affect a person’s mood in a benevolent way. A simple hello or asking how they are doing makes a wonderful difference, emphasized by the staff and in my time at the library.”

Prinnes Wilson- Prinnes is a recent graduate of Democracy Prep and will be attending Bates College in Lewiston, Maine this fall, majoring in business or economics. He has chosen this major because he believes it will help get accepted into law school by developing skills such as decision making, communication, and networking. During college, he would like to travel abroad to gain an understanding of the world around him, and the many different people and cultures that inhabit it. He believes travel will allow him to become a more savvy and informed lawyer. Prinnes first discovered the West Las Vegas Library in middle school. He would walk there every day after school to get his homework finished while waiting for his mom to pick him up after work. His time at the can best be described in his own words.

“At the library, I was also able to socialize and make many friends with other scholars in my community. By 8th grade, the West Las Vegas Library became like my second home. I formed close bonds and relationships with many of the people who worked and visited there. This is why, along with motivation from the library staff, I decided I wanted to give back; the West Las Vegas Library has given so much to me. At the beginning of my 9th-grade year, I applied to be a volunteer at the West Las Vegas Library as soon as I turned 14. Since then, I have been a dedicated volunteer there. Even today, almost 4 years later, I still serve my community and other children that come to the library like I once did. I have performed general library duties such as book cleaning, and shelving during my time as a volunteer. My favorite thing to do, however, is to help, prepare, and run children’s programs like the ones I was in when I started going to the library. I also participated in the Reading and Math Buddies program during my time at the library.” 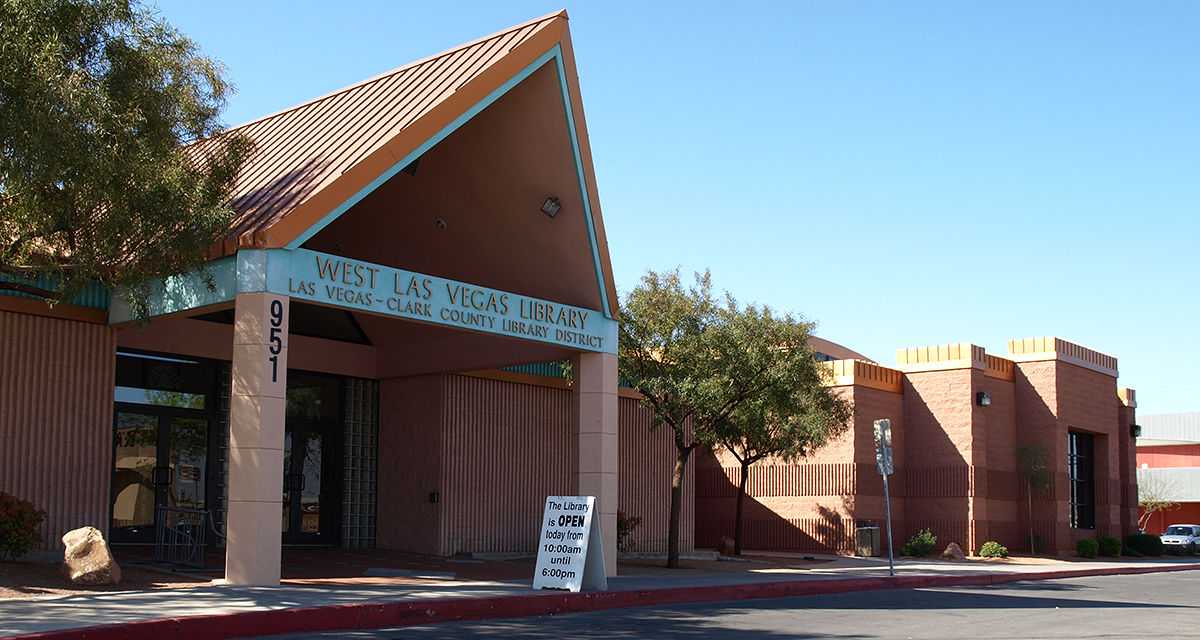 West Las Vegas Library
951 W. Lake Mead Blvd.
We welcome your respectful and on-topic comments and questions in this limited public forum. To find out more, please see Appropriate Use When Posting Content. Community-contributed content represents the views of the user, not those of Las Vegas-Clark County Library District