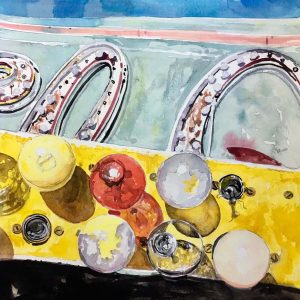 A collection of watercolor paintings featuring vintage Las Vegas signage from the Neon Museum Boneyard. Doug Waterfield, artist and the University of Nebraska at Kearney Professor of Art, sees the retired, faded, and rusting casino signs as reminders that life and its pleasures are temporal.

By Doug Waterfield, Professor of Art

While this show of paintings looks back to the good old days, I hope it also serves as a reminder of how temporary the pleasures of the good old days might be.  It’s also a statement on how we as Americans are willing to suspend our beliefs, and our fears, as long as it takes to have a good time.  Though they once were symbols of fun and potential winnings at the craps table, these rusting hulks of Las Vegas have become symbols of reality, and a reminder not to put too much stock in bright lights and vivid colors.  Everything will, either quickly like an atomic bomb explosion, or slowly in the fading desert sunlight, fade away.  All we will have are the memories.