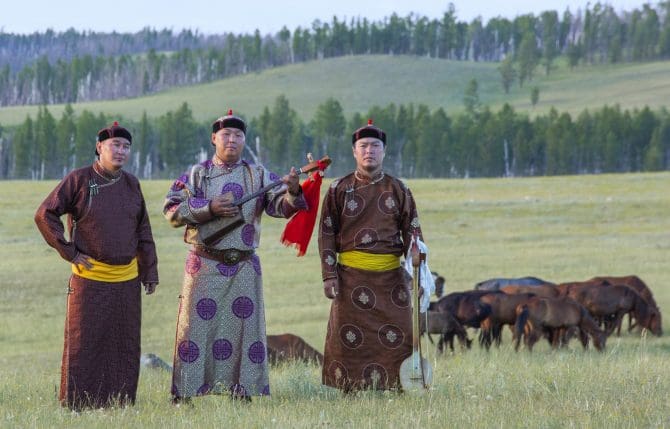 What is Tuvan throat singing? The answer begins in Tuva, an area in the Russian republic about the size of Wisconsin, which lies along the border of Mongolia. Throat singing is an ancient style taught from one generation to the next. It requires precise control of the larynx, through which a singer can vocalize multiple notes at the same time.

You don’t have to travel far to experience this unique musical style. One of the foremost Tuvan throat singing groups, Alash, performs two shows at the Library District this March. The three members of the group — Bady-Dorzhu Ondar, Ayan-ool Sam, and Ayan Shirizhik — have practiced throat singing since childhood.

Alash tours internationally, and has been the subject of national stories by PBS, the Washington Post, and more. As the group’s manager, Sean Quirk, explained to PBS, the trio’s ability to manipulate their voices represents a lifetime of training, and their devotion to their craft is strongly connected to their heritage.“It’s so deeply tied up with the culture and the
way Tuvan people view the world,” he told the interviewer. “It is a worldview built on a long, long history of nomadic life, which means you’re very attentive to the cycle of nature … the sounds
of nature.”

In fact, their roots are so connected to the Tuvan countryside that their name is a nod to the Alash River, which runs northwest in Tuva.

At an Alash show, you can expect to hear not just multiple notes simultaneously, but a blend of Tuvan tradition and contemporary Western music. Alash cites Jimi Hendrix and Sun Ra among their influences. They also contributed vocals to the cut, “Jingle Bells” on Béla Fleck & the Flecktones’ Grammy Award-winning album, “Jingle All the Way.” Does this mean a cover of “Purple Haze” is in the cards? No matter what, you truly haven’t heard anything like Tuvan throat singing and it’s not to be missed.