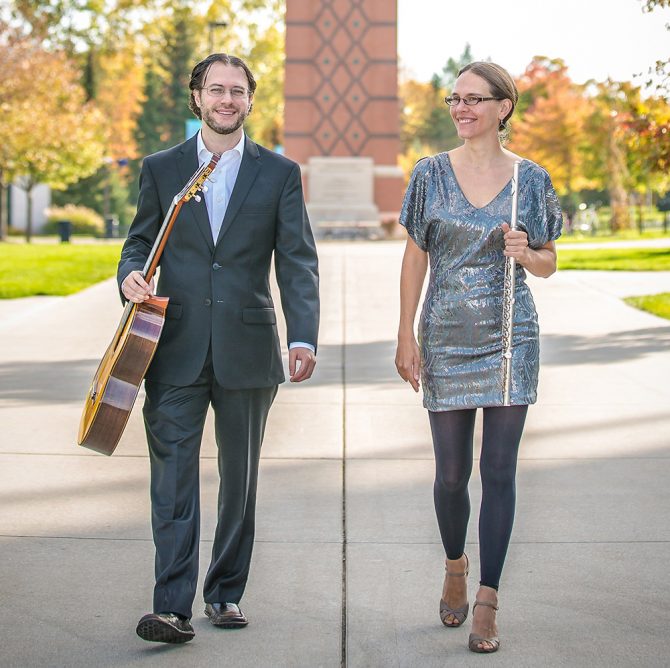 As you listen to the flute and guitar of Folias Duo, it’s easy to imagine yourself in the great outdoors, with the sounds of whispering wind softly blowing and water streaming gently by you. Andrew Bergeron and Carmen Maret celebrate the serenity of nature and draw heavily on its influences to inspire their music — which also incorporates classical, South American folk, tango, jazz, and world music styles.

This talented husband-and-wife team has performed as Folias Duo throughout the United States, Europe, and South America, exploring and enjoying the outdoors during their travels in between shows. Luckily for us, their summer plans include three concerts with the Las Vegas-Clark County Library District.

Andrew and Carmen are not only musicians (he plays the guitar, she plays the flute), but composers, and even tango dancers. The pair have performed together since 2002 and taught musicality classes — specializing in tango — since 2003. They have released six studio albums under their own record label and publishing company, Folias Music.

While they call Grand Rapids, Michigan, home, Folias Duo is frequently in demand and on the move, having played 26 shows across 13 states last summer (including popular visits to our own Clark County and Mesquite Libraries). During that time, they also wrote new music, following their tradition of completing a “composing residency” at a cabin in Colorado’s rural La Garita mountains. (Remember how their music transports you to the wonders of nature? That’s by design!)

The couple’s love for music and nature is well documented on their website, FoliasMusic.com. Their blogs chronicle their travels, and videos capture the stunning locales they’ve visited while on tour. But Nevada continues to be a favorite location, drawing them back year after year. In fact, their performance of “Los Hermanos,” written by Argentine folk artist Atahualpa Yupanqui, was recorded in Southern Nevada’s Valley of Fire State Park!

If you’re looking to decompress from the stress of city life, the soothing music of Folias Duo is just the ticket. Where will their musical journey take you?