All Library District branches are OPEN with full services at 25% total capacity, with Curbside Pick-Up Services available at select branches. We invite you to return your items to our outdoor book drops or by coming in to visit your nearest branch. You will not be charged late fines for any items that may be overdue. Face coverings are required for entry to all branches, and social distancing guidelines are in place following the governor’s mandate. You can continue to enjoy free online resources, here, and a comprehensive list of free community services, here. Stay safe and we look forward to serving you!

All Library District branches will be closed on Monday, January 18 in observance of Martin Luther King Jr. Day. 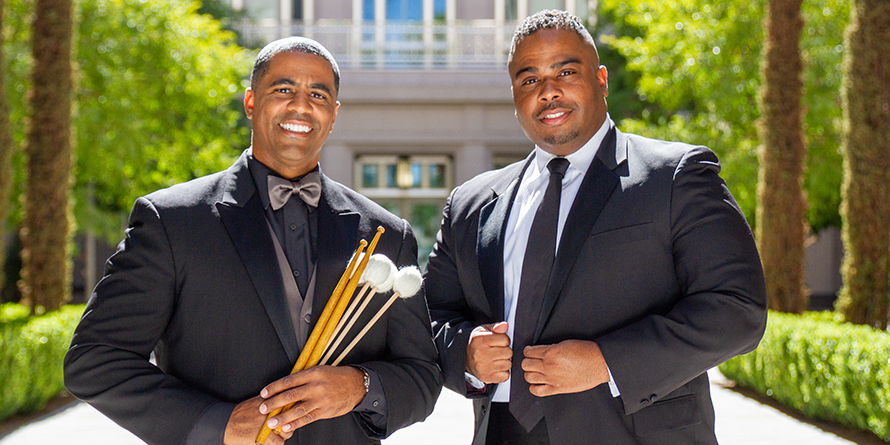 While connecting at a men’s bible study, Rodney Arnett Jr. and Ricardo Reese discovered not only that they share a love for classical music and jazz but also, they are both UNLV Master of Music alums. Their mutual musical passions led them on a quest to “give back to the Las Vegas community,” offers Arnett, by creating a singular concert experience.

Their partnership has produced this month’s “Spirituals and Beyond,” being presented at the West Las Vegas Library during African American History Month. The collaboration between Rodney's bass-baritone and Ricardo's percussion focuses on their heritage and musical training to create “a show that makes audiences laugh, cry, and shout,” enthuses Rodney.

His musical heritage stems from his grandfather who sang in the Indianapolis Opera chorus. He took that cue and joined the Indianapolis Children’s Choir. He also flourished at a performing arts middle and high school, studying string bass and voice. Rodney later attended Illinois Wesleyan University where he graduated with a Bachelor of Music, Vocal Performance. After earning a graduate degree at UNLV in Vocal Performance, he brought his talents to the stage performing in “Porgy and Bess” with the Los Angeles and Indianapolis Operas, and New York Harlem Productions’ European tour.

Ricardo also became actively involved in music at a very young age. “I started my journey with percussion in middle school and high school and I quickly developed my craft and excelled in all ensembles such as concert band, honors band, jazz band, and marching band,” he says. This led to a full music scholarship to Virginia State University, where Reese majored in music performance. After moving to Las Vegas, he started a jazz/R&B band called Reese’s Peese’s and earned his master’s degree in percussion at UNLV.

Concertgoers can expect to experience a lot of emotions from these classic religious folk songs. Rodney and Ricardo promise “a concert experience that has not been performed in the city before.”