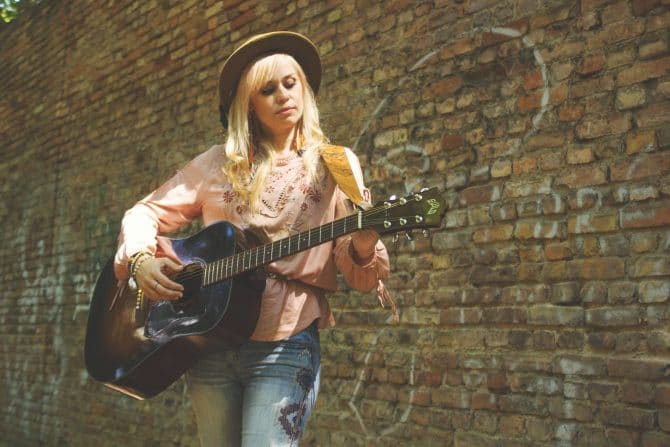 You could say that a sixteen-month tour across the U.S. in an RV could have an effect on a person. That’s what happened to Swedish-born singer Sofia Talvik, and her Americana-soaked folk music is the result.

Sofia released her first album in 2005, and by 2008, she had become the first Swedish female artist to play one of America’s most popular music festivals, Chicago’s Lollapalooza. On her sixth full-length album, “Big Sky County,” her music has taken up a toe-tapping twang — which she’ll bring to three performances at the Library District this May.

You will surely fall for Sofia’s subtle rasp and guitar-driven melodies. And upon close listen, you can also pick up on her natural songwriting talent.

“I’ve seen the Blue Ridge Mountains rise tall/I’ve heard the San Francisco sea lions call/I left my heart in a dirty old bar/In Laramie, Wyoming, I slept in my car/And there were days when I thought; this is it/I couldn’t go forward, yet I couldn’t quit,”

she sings on “Big Sky Country.” As if writing and singing aren’t enough, she is also her own video producer. While on tour, she continues to write songs and edit her own music videos from footage captured on the road.

Sofia takes that same raw, honest approach to her art with her newer songs, having released “Die Alone” in 2018.

“I wrote this song because I got tired of getting the question ‘Do you have kids?’ every time I was playing live. I figured if I wrote a song that answered the question, then people wouldn’t have to ask me.”

The answer is: She doesn’t, which is OK. Her children are her songs and she is preparing to give birth to what will surely be another milestone album later this year. Until then, we can hear more of her road stories, new music, and honest lyrics from a Library District stage!