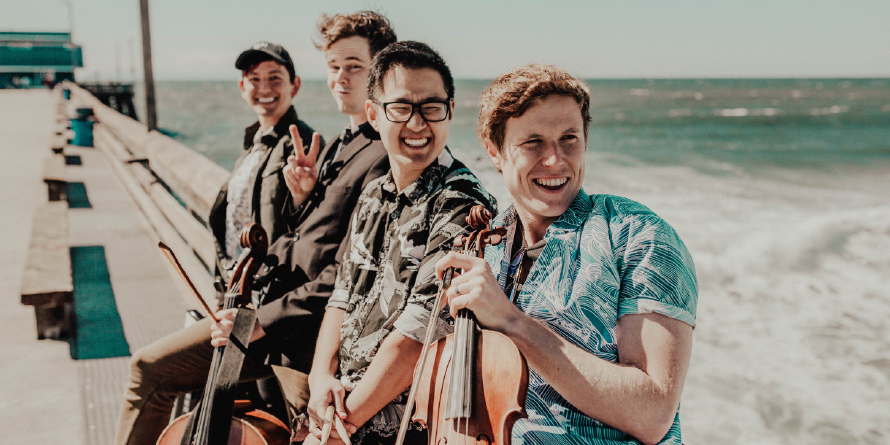 The musical origins of Streetlight Cadence started in the most unusual of ways. In 2010, the band began as starving music students in Waikiki, classically trained but short on cash. They found each other when accordionist Jesse Shiroma responded to a Craigslist ad posted by violinist Jonathon Franklin seeking “interesting musicians.” Cellist and fellow orchestra compadre Brian Webb joined the gang, and they took to the sidewalks of Waikiki and Honolulu’s Chinatown. This became their public stage to share their music with passersby and earn themselves some bread to buy, well, bread!

Longtime friend and drummer Ben Chai, who had done some professional gigs with Kenny Loggins, eventually made the decision to leave his day job and join the group, making him Streetlight Cadence’s final addition, and adding the finishing touch to their distinctive sound, often labeled as alternative-folk-pop.

The band draws inspiration from many genres, and coming up in April, Library District audiences will enjoy both originals and cover songs ranging from pop to classical. Described as a synthesis between Mumford & Sons and The Killers, they can be described as millennial pop-punk energy with Nickel Creek instrumentation.

Food, or lack of it, is what jumpstarted the band’s beginnings, and food continues to play a unique role in their story. In 2018, Streetlight Cadence was greenlit for a television show, “Will Play for Food,” that takes them back to their roots of busking for bread. The show lands them in locations around the world as they try to earn their way to a local meal. Season one of this self-produced Emmy-nominated travel TV show premiered on YouTube in January 2020.

Muses one of the band members about their connection to food in the TV show’s promotional trailer, “One of my favorite things about this band is that we have always shared a meal after we’ve played our songs because, I mean, let’s face it, when you are a musician you probably don’t eat very often!”

You won’t want to miss the tasty vibe of Streetlight Cadence at their Library District debut.