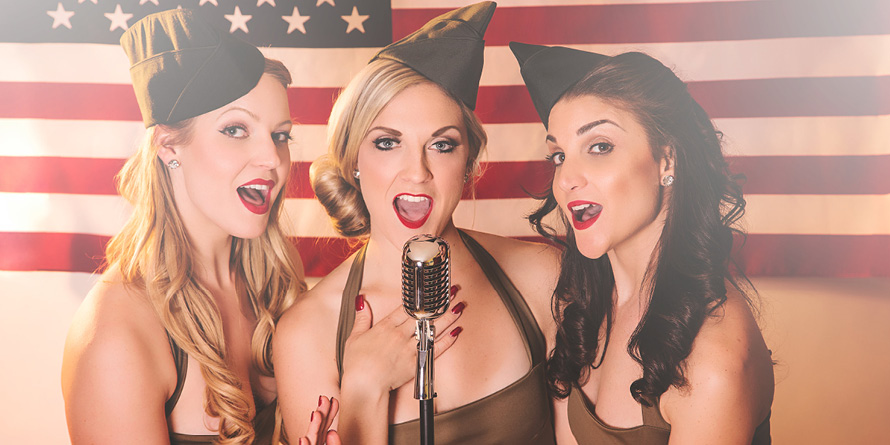 One of our most popular shows at the Library District, the Swing It! Girls return with their smooth-as-silk harmonies and boss band, just in time for Veterans Day. Their show pays homage to the vintage USO-style shows that are still wildly popular today.

Like the Andrews Sisters of the 1940s era, the Swing It! Girls are three extraordinarily talented women who sing Swing and Boogie-Woogie era music with toe-tapping energy. Their shows make audiences want to jump to their feet!

Boogie-Woogie music and dance became popular in the “Roaring 20s,” a period in the early 1900s that was defined by this cultural craze. The fast-paced beat inspired both Boogie-Woogie and Swing dancing to match, and it was the thing to do on a Saturday night. This style of music was the focus of USO (United Service Organization) shows, which traveled throughout the world to entertain the troops during World War II. The goal of these USO shows (which continue to this day) is to help ease the homesickness of our soldiers abroad by bringing a slice of pop music, fun, and home to the world’s theaters of combat. Springing from a time in history when freedom was under threat by attacks from foreign powers, Boogie-Woogie music is rooted in patriotism, a theme you will notice throughout Swing It! Girls’ performances.

“Boogie-Woogie Bugle Boy,” “Don’t Sit Under the Apple Tree,” and “Mr. Sandman,” are just a few of the familiar tunes you will hear when these ladies hit the stage, along with 15 other songs, including an a cappella finale and patriotic encore. The Swing It! Girls bring a fresh take on these timeless tunes.

If you lived through this era, it will transport you back in time, and if you’re just discovering this genre of music, it will be love at first listen!